Antoinette Harrell has spent countless hours in the National Archives in Washington, D.C., conducting peonage research in Class 50 (Peonage) Litigation Case Files, 1907 – 1973.  The Class 50 litigation case files were created or accumulated by the Civil Rights Division in carrying out the Department of Justice’s (DOJ) responsibilities in matters arising under statutes implementing the Thirteenth Amendment to the Constitution. 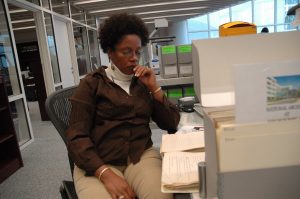 This series consists of litigation case files that cover matters arising from violations of statutes implementing the Thirteenth Amendment to the Constitution, which outlaws slavery and certain forms of involuntary servitude. The files pertain to complaints made by persons (victims) who were being held against their will or forced to work off debts through threats and intimidation by employers or others (subjects). Most of the victims were Negroes who were physically forced or sometimes beaten to return to former employers to work off their debts. The files contain correspondence, memorandums, telegrams, newspaper clippings, transcripts of testimonies, FBI reports of investigations, and indictments.

Harrell’s peonage research primarily focuses on the states of Louisiana, Mississippi, Arkansas, and Florida. Some of her breaking stories are of African- American men who were held in a system of modern day slavery. The Mae Louise Wall Miller Story ” a woman who spent her youth in Mississippi as a slave.

Harrell traveled to plantations interviewing families who had lived on the plantations for several generations.